I just came across this great blog at London Cyclist, where Andreas talks about lessons learned from a year of commuting by bike.

There are some great lessons, like - "a little bit of maintenance goes a long way", "be puncture resilient" and "ride positively defensively". But the thing that really I really liked was the idea of setting goals to promote your commuting habits. Andreas has the idea of paying your bike off.  Nothing is as motivating for a cyclist as getting a new bike, and the idea of paying off that bike by money saved by commuting is great. Say you got a new bike - $500, and every trip you take saves $2:50.  So if you keep score, after 200 trips you have paid off your new bike. Sounds even easier when you look at it as 100 round trips. Andreas payed off his bike in 4 months. 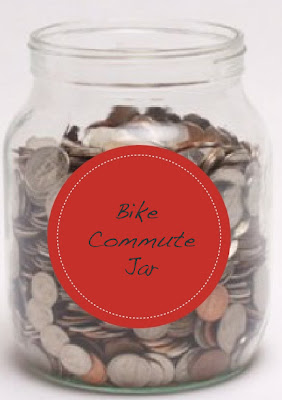 Hitting the target number of rides would definitely be satisfying, but you could sweeten it by rewarding yourself when hitting the target, maybe a six pack of your favourite brew, or some new cycling gear.

If you have a bike, possibly you could motivate yourself by every time you take your bike, instead of the car or public transport you could put a couple dollars in a jar on top of the fridge. And after a year or six months of cycling you could grab all those coins you have saved and go and have a flash dinner, or a new set of brogues. Hey I know people who could take a short holiday with that sort of money.

Rewarding yourself for commuting is a great idea.