Well, it seems that helmets are in the news again. Fox News reported that States with helmet laws had 2 bicycle-related deaths for every 1 million children younger than 16 years old. Compared to 2.5 deaths for every 1 million children in states without helmet laws. On the surface this seem a compelling reason for mandatory helmet laws. I don't think this 20% difference is significant, as factors relating to each states friendliness to cyclists {provision of bike lanes, general road conditions, even weather} could have skew the numbers greatly.

I'd like to know whether states with helmet laws have less or more kids riding per population, compared to those without laws. As to me the major concern is whether mandatory helmet laws reduce the number of cyclists.

Over at Grist,there is report, on the response on the internet, to the following photo, taken in New York. 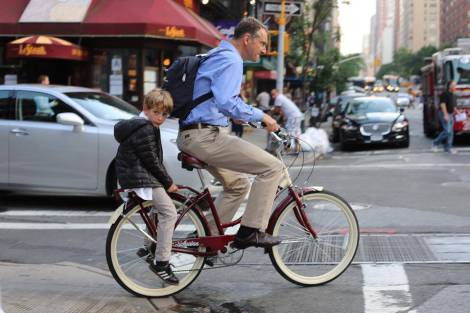 Well, as far as I can see, helmets are required in New York for kids under 13. So the father is OK. But the child may or may not be, I won't assume what age he is. Concensus on the internet discussion seems to be this is fine, if it was in Europe, but it's not OK in the United States. And definitely not OK in Australia and New Zealand, where helmets are mandatory.

I think in that helmets are great, even if reports on their effectiveness are varied. If you have one, why not wear it?  But I do think our road conditions should be safe enough to ride without the need for helmets. I'll also respect this man's choice, and assessment of his situation...... {900 people die on average every year in the US as a result of bicycle related accidents. Around 10,000 people are killed by guns every year in the US. Given this it would seem that bullet proof vests should be mandatory?}

I hope that in New York, with the implementation of the bike sharing scheme, and the increased number of bike lanes planned by DOT, that cycling will increase in prevalence. And intern, this should encourage drivers to be more careful, and make helmets less of a necessity. I do think mandatory helmet laws reduce the number of commuter cyclists.Do you thinks helmets should be required by law?
Posted by alex
Labels: city bike, compulsory helmet laws, urban cycling
Email ThisBlogThis!Share to TwitterShare to FacebookShare to Pinterest