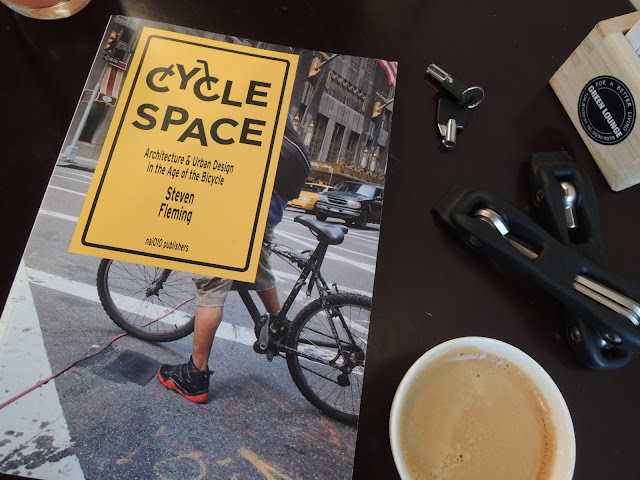 Well not many people write books about architecture and cycling. Steven Fleming however has, with his book Cycle Space. On the surface one would think, "Oh No, a book about bike racks", but its far from that.

Actually it seems Steven has meshed many issues into this book, economics, politics, geography, history. Really, who ever thought cycling in the city was so complicated. If you are an enthusiast of cycling, urban design, or architecture, this is a valuable read. I just wish he didn't put in the coloured text...  cyclists shouldn't have to wear helmets, and text should be black...  preferably serif.

Anyway, as disjointed as my last paragrah was, so to is Stevens book, bouncing from Singapore to Copenhagen, fixed gear to bakerfeits, Zaha Hadid to Le Corbusier, elevated bicycle superhighways to using abondoned underground railway lines. It's an inside into the way Steven thinks {sort of like me} but also a reflection of the complexity surrounding the issue of bicycles and how they interact in the urban environment.

In as much as this book is an analysis of the current state of cycling and architecture, its really a selfish promotion of cycling, and how to make the urban environment better for cycling. For Steven, wants to ride everywhere. If you too are looking for "cycling utopia" - read it. OR at least read some more reviews over at Amazon...
Posted by alex
Labels: book review, cycle space, steven fleming, urban cycling
Email ThisBlogThis!Share to TwitterShare to FacebookShare to Pinterest