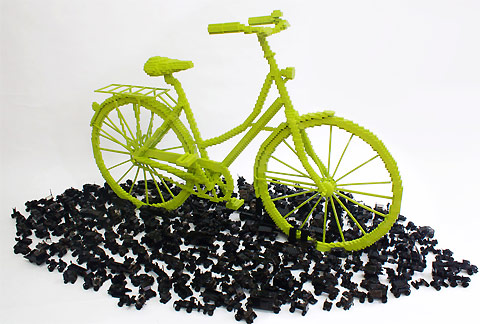 Kenny, a New Yorker, was inspired to make the creation one day whilst riding to his studio through Midtown Manhattan. With cars jammed left right and centre, he was still able to smoothly zipp through the chaos on his bike. So with 2 days, thousands of kids and over 75000 black Lego blocks the traffic jam  was created, whilst Kenny assembled the eco green bike. But whats really cool is that the sculpture is for sale, at $12,500 it makes a pretty expensive Lego kit (it is however glued together).

Another pice by Kenny which I like is "SUV" , a piece questioning America's love of the SUV.