Today I found an interesting article at theconversation. It looks at cycling in Australia, and perhaps more specifically the lack of cycling in Sydney.


The article notes that according to the last census: 44,511 people in Sydney, 67,985 people in Brisbane, and 70,000 people in Melbourne cycle daily. Of these, 6,246 Sydney cyclists ride to work (0.78% of city population), compared with 10,177 in Melbourne (1.11%) and 7,274 in Brisbane (1.6%).
I've always wondered why cycling participation is so low in Sydney, especially when in comparison Melbourne has a reputation for bad weather. Some limited research however shows me that Sydney and Melbourne actually have a similar number of rainy days per year, but Sydney’s annual rainfall is twice that of Melbourne's. So this could be a possible cause, getting wet is one thing, getting drenched is another... 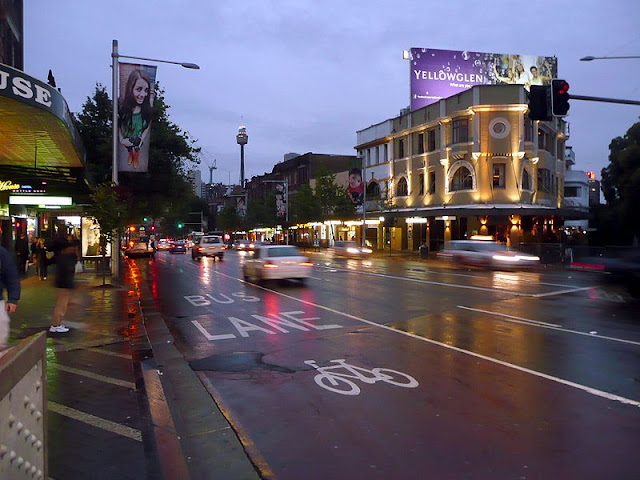 Sydney is also hilly in comparison to Melbourne, and that could be a factor affecting cycling numbers. But for me if you have the right equipment it shouldn't really matter. But for sure taking a classic dutch bike up the Spit is not going to be much fun. And as the article states, San Francisco is a great cycling city, and its not exactly pancake flat.
Sadly the article also finds that; "In comparison with other cities around the world with similar metropolitan-area-population, Sydney has one of the highest cyclist death rates." Im not really surprised by this, as I personally find it more dangerous in Sydney than in other cities around the world, and for me the reason for this is not the number of motorists on the road, but the way in which the motorists operate their vehicles. With aggression.
The City of Sydney has introduced more bike lanes to help improve the statistics, but the article suggests that what is really needed is the development of “a proper cycling culture...
Developing and fostering a healthy cycling culture is not simply about encouraging more people to cycle, or introducing more cycling infrastructure. Behaviours and attitudes also have to change; among cyclists, pedestrians and motorists, and also among those that contribute to city planning.
Cycling needs to be perceived as a viable way to get around, as it is in so many European and Asian cities. But it should also be seen as an activity that allows more spontaneous explorations of the city and the opportunity to experience the city in a more intense and rich way.
And perhaps in my mind there should also be some development of a healthy 'driving culture'.
Finally the article suggests that Sydney should look to San Francisco as a model for developing a cycling culture. Where it seems that a combination of, bicycle  infrastructure projects, and events celebrating cycling culture, have created a true cycling city.
Posted by alex
Labels: bicycle commuting, cycling, cycling culture, melbourne, sydney
Email ThisBlogThis!Share to TwitterShare to FacebookShare to Pinterest