According to a new poll by The New York Times, and the related article, when asked simply whether bike lanes were a good idea or a bad idea, 66 percent of New Yorkers said they were a good idea.

Its pretty encouraging to see these results though, but also despite "enthusiasm for the lanes, most New Yorkers are not riding regularly. A third of adults in the city said they owned a bicycle, and nearly half said nobody in their household had one. Of those who do own a bike, about half said they rode once a week or more."

As mentioned before in my blogging, I think the "build it and they will come" approach to increasing cycling is not necessarily the best approach.

A poll at SMH online asking: Do you think Sydney needs to invest more on cycle lanes? Resulted in a positive 71% yes, but I'm not sure how well that reflects the full demographics of Sydney. But it is a similar result to the NYT survey. So I guess people agree with bikes lanes.

On a sadder note, as reported at road.cc, "A teenage cyclist hospitalised with serious injuries when she was hit by a car while riding through an intersection in a town in New York state on Monday evening will be charged with running a red light prior to the incident". It was also reported that the cyclist may have been using headphones at the time of the incident. Anyway - be careful out there on the roads. Another article at road.cc caught my attention, firstly for this nice info graphic from Share the Road UK.. 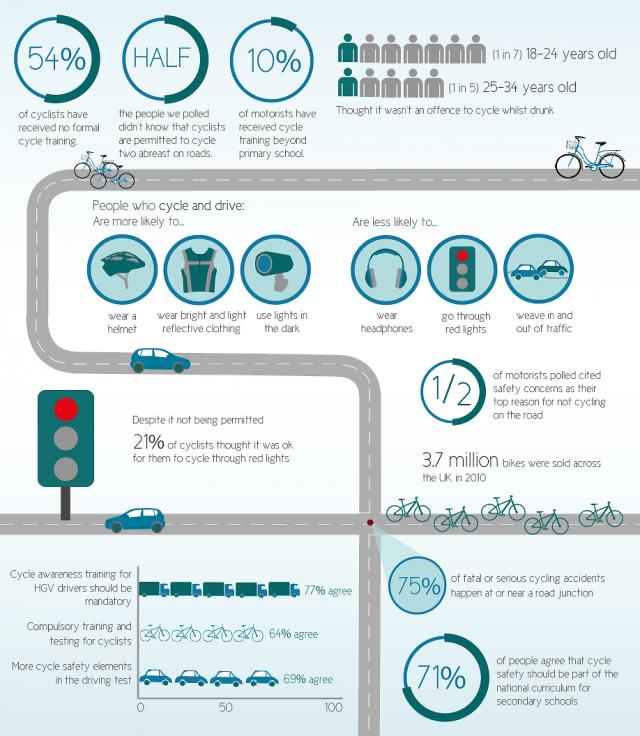 Seeing the headphones graphic and the red light sign next to each other reminded me of the cyclist in New York. The accident also occurred at night, so perhaps lack of lights and bright clothing may also have been an issue. Anyway it is a reminder to all of us, and indeed, cycle lanes or not, one should make sure to undertake best practices in all cycling situations.