A few days ago on Cycle-Space there was a blog about the safety of cycling in Singapore - "Cars can't hit you in Singapore la". Like the author, I too have lived, and ridden in Singapore, and by all means I would not consider it a cycling friendly place. Lets face it people pay a lot for their entitlement, or COE, to drive there. Currently I think the COE or right to own a midsized car (car is not included) will cost about 60,000 Singapore Dollars. Thats more than the combined cost of every car I have ever owned.

A few weeks ago, I came across news of a cyclist, hit by a truck, and consequently killed in Singapore. I was even more astonished that several websites had published a picture showing the result. 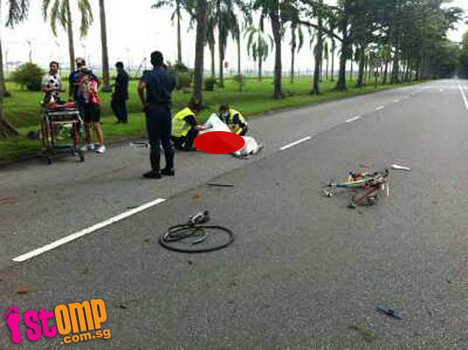 By the looks of the bike, there was a major collision. But I was surprised that the publishers didn't have the red dot that you see in the above photo. One could clearly see the body of the dead cyclist. All a bit insensitive in my mind.

Its very sad that the accident happened on this particular road, as it is one of the major destinations for recreational cyclists. And ironically perhaps, there is even a bicycle path running parallel to this road, but for me this highlights an issue - "cyclists want to be on the road."

The government in Singapore needs to realise, cyclists want to be on "the road", and have the same degree of freedom that cars enjoy. And for this proper cycle lanes, are needed on roads, they don't need to be segregated, just adequate space for cyclists, decent road shoulders, and signage on popular cycling roads to alert drivers.

Recreational cycling has seen a dramatic growth over the years in Singapore, though I cannot find any statistics. And I would say the government has actively promoted cycling. Now though given the numbers of cyclists they need to provide more encompassing infrastructure.  There is a National Cycling Plan, but this seems limited to creating recreational bike paths, that are generally shared with pedestrians, and are not designed as a way of getting from A to B.

Singapore could be a fantastic cycling city, its flat, and small. It just needs more infrastructure, and driver awareness. Yes, its a bit hot and humid, but people can get used to that.